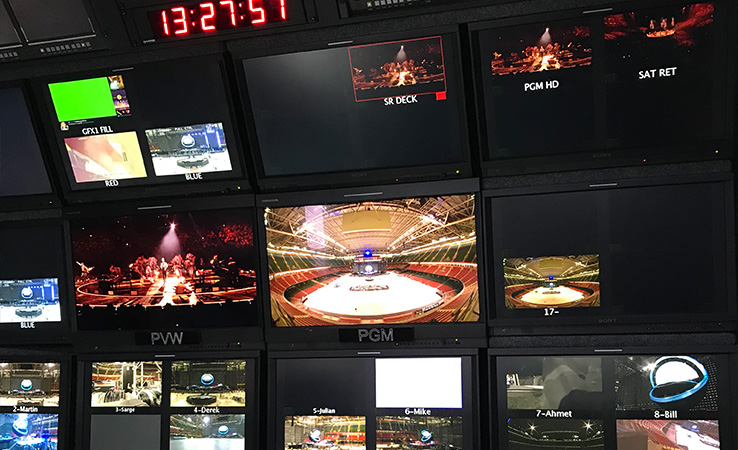 Broadcasting Live To Cinemas - How It's Done

Have you ever wondered what is going on behind the scenes when you’re watching your favourite band, singer, opera or ballet live in cinemas?

Well besides the preparation, skill and hard work of the performers, there’s a lot of other preparation and work that goes on behind the scenes that you might not know about and we’d like to show you.

Weekend before last, we broadcast Take That Greatest Hits Live directly from Principality Stadium in Cardiff to cinemas all over the UK and Ireland and Europe. Besides the preparation leading up to this day, I thought it would be great to explain how the live broadcast day works.

It begins either the night before or early in the morning on the day of shooting when the crew involved in the live broadcast and live filming all load in and set up together – this would usually be in a large open space surrounding the venue. Rooms full of highly skilled technicians, production teams, managers, directors, assistants, security guards, producers and sound engineers there is a great atmosphere of everyone catching up and working together.

Firstly we have the OB truck (outside broadcast). This is a busy place filled with screens and more people than there are seats. This is where the director and crew have access to be able to receive and see all the pictures from the many cameras in the stadium. This is where the director watches and cuts together a master recording, which you are watching LIVE in cinemas.  The OB also houses the colour correction unit (CCU) - they are responsible for ensuring the colour balance is consistent throughout the whole program.

Lastly we have our truck – the SNG truck (Satellite news gathering) although the smallest truck out of the three, it is a very busy place to be. SNG trucks are traditionally used by news channels to get to a location and uplink the news story quickly and directly via the satellite. Our truck is equipped with a high-powered satellite dish, as well as all the monitoring gear to uplink and then downlink the signal. We always downlink the feed ourselves direct from the satellite so we can see exactly what the cinemas are receiving. We also monitor the weather, the neighbouring satellite signals and the strength of our uplink!

We hold two satellite tests throughout the day for all the cinemas to join – this is to make sure their satellite and their connection is working properly. We play a video via the satellite for 45 minutes for cinemas to be able to check sound levels, screens, the image and the audio. This enables the cinema to contact us if they’ve had any problems or if something doesn’t look quite right to them. We then help them resolve it so they don’t encounter any problems for the LIVE show!

After the show has been broadcast and has ended, there is time for pack down and then always and most importantly, there are celebration drinks for all involved after a very long but successful day!