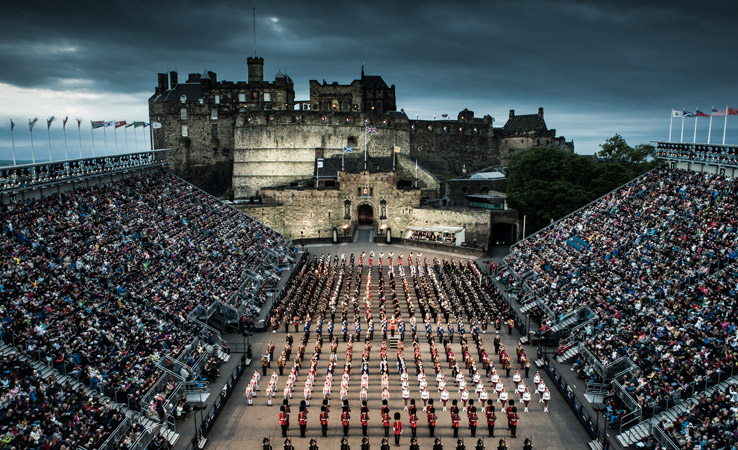 Celebrating 100 years of the Royal Air Force and the Year of Young people, the 2018 Royal Edinburgh Military Tattoo theme was The Sky’s the Limit - and this year's show certainly hit plenty of high notes. CinemaLive were lucky enough to see the show during the live filming, before we release the event in cinemas in Canada for the second time on 28 October and in Australia and New Zealand for the first time on 24 & 25 November.

It was a magical night on the Esplanade of Edinburgh Castle as the Pipes and Drums, Massed Military Bands and special guests from across the world paraded in this extraordinary setting. Here is a rundown of our the 2018 highlights:

More than 100 performers represented Mexico in this colourful and fun segment complete with studded charro outfits and wide brimmed sombreros. Filling the stage with traditional mariachi music, it was the final song, their version of the hit Despacito which got the crowds on their feet!

Their first appearance at The Royal Edinburgh Military Tattoo was deemed such a success that they were welcomed home by a government reception and a city centre celebration! Receiving gasps throughout their 2018 performance, Top Secret, the sensational drumming group from Switzerland entered the stage to the Mission Impossible theme tune. What followed was an astonishing feat of drumming expertise combining traditional Basel drumming with other styles. Flying drum sticks, flag juggling, complex marching patterns and a few flames couldn’t distract the group whose perfect synchronicity didn’t miss a beat.

This moving tribute to the history of powered flight featured some incredible music (including the iconic Star Wars theme). This celebration of the Royal Air Force's 100th anniversary year featured projections of spitfires, jets and a recreation of Apollo 11's famous mission to the moon accompanied the music of the The Massed Military Bands and Masses Pipes and Drums.