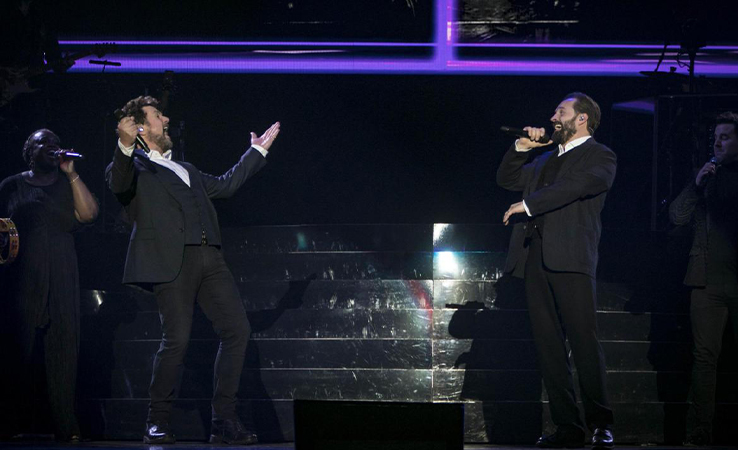 In just under a month, we’ll be bringing Ball & Boe to a cinema near you and we couldn’t be more excited about it. It got us thinking about all the legendary duos out there. Here’s just a few of our personal favourite double acts.

Our favourites! Alfie Boe and Michael Ball met when they were co-stars in a production of the musical Kismet in London. In 2017, Alfie teamed up with Michael Ball to produce one of the year's most successful classical albums – 'Together'. The album featured some of the best-known songs from musicals. The album went double platinum so the pair recorded a follow-up called 'Together Again'. Now they’re ‘Back Together Again’ with their latest album and you can catch their live show in cinemas around the UK and Europe on the 28th or 29th March 2020!

Simon & Garfunkel were an American folk-rock duo consisting of singer-songwriter Paul Simon and singer Art Garfunkel. One of the best-selling music groups of the 1960s, their biggest hits—including The Sound of Silence, Mrs. Robinson, The Boxer, and of course, Bridge over Troubled Water —reached number one on singles charts worldwide.

Sonny & Cher were an American rock duo of entertainers made up of husband-and-wife Sonny Bono and Cher in the 1960s and 1970s. The couple started their career in the mid-1960s as R&B backing singers for record producer Phil Spector.

The pair first achieved fame with two hit songs in 1965, "Baby Don't Go" and "I Got You Babe". Signing with Atco/Atlantic Records, they released three studio albums in the late 1960s.

The White Stripes were an American rock duo formed in 1997 in Detroit, Michigan. The group consisted of a husband-and-wife duo - Jack White and Meg White. After releasing several singles and three albums within the Detroit music scene, The White Stripes rose to prominence in 2002, as part of the garage rock revival scene. Their successful and critically acclaimed albums White Blood Cells and Elephant drew attention from a large variety of media outlets in the United States and the United Kingdom, with the single "Seven Nation Army" which used a guitar and a whammy pedal to create the iconic opening riff becoming their signature song. Although Jack and Meg claimed to be brother and sister - their cover was blown by a Detroit newspaper when it came out that they were married in 1996 and divorced in 2000. Even though this is an unusual situation, their last three albums each won the Grammy Award for Best Alternative Music Album.