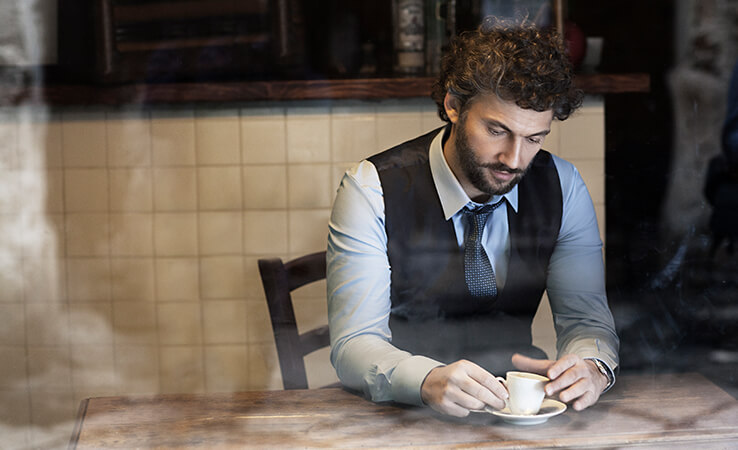 “Italian music has this unbelievable way of producing such immortal melodies - full of sun and warmth - that all day long you can’t get them out of your head!”

Kaufmann’s tribute to Italian music, his album Dolce Vita, is indeed full of warmth and sunshine – even in its more dramatic tracks. To celebrate our upcoming cinema release of Jonas Kaufmann: Under the Stars, we’ve picked our top 5 tracks from the album – did your favourite make our list?

We couldn’t call ourselves movie buffs here at CinemaLive if the famous Godfather Theme didn’t make our list! Nino Rota's Oscar-winning score is instantly recognisable, but not everybody knows how many different versions it has seen - both instrumental and with vocals, in several different languages and music genres - from rap to heavy metal. Personally, next to the instrumental 'Godfather Love Theme', this heartfelt operatic rendition from Kaufmann is our favourite.

Light and fun, this conversational track is the most playful one on the Dolce Vita album – and it expresses its title meaning perfectly. If you close your eyes, you can almost smell the rich espresso and hear the warm bustle of a lively Italian piazza.

One of several Neapolitan classics performed by Kaufmann, and by many great tenors before him - it’s hard to believe it’s over 100 years old! Torna a Surriento (Meaning: Come back to Sorrento) also holds a special place in our hearts as it’s been often played by André Rieu and his orchestra at his annual summer concerts in Maastricht.

While you would know this masterpiece as Andrea Bocelli’s signature song (along with his English duet version with Sarah Brightman re-titled Time to Say Goodbye), we can’t help but get lost in Kaufmann’s rendition too – his deep, honey-like voice truly shines in this track.

A beautiful, soft and romantic final track that ties up the whole album perfectly together. Originally recorded in English by The Magnetic Fields, and made hugely popular by Peter Gabriel’s cover, ‘The Book of Love’ is often used in romantic film & TV scenes – as well as real life weddings. Italian singer Zucchero had it translated into the version that Kaufmann uses here.

Do you agree with our picks? Or perhaps your top 5 is completely different?

The Dolce Vita album will be performed live by Kaufmann in Waldbühne this summer, and you can see his concert in cinemas on 30 August. Tickets on sale now.