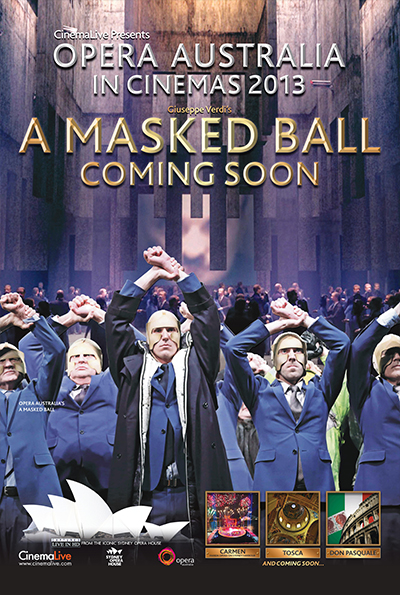 The acclaimed soprano Tamar Iveri and rising Mexican tenor Diego Torre make their role debuts as Amelia and Gustav III respectively while the outstanding José Carbó portrays Count Ankarström in his first Verdi opera. Ollé’s visceral production sets a new benchmark in theatrical innovation and promises to be as mindboggling and daring as it is musically lush.

While the benevolent ruler plans a grand masquerade for the pleasure of his subjects, his conspirators are plotting his end. The traitors, however, will only succeed if they can enlist an ally close to the king. With its unforgettable melodies and fine balance of romance and tragedy – and one of opera’s greatest love duets – the international collaboration is a first for Opera Australia ahead of seasons in Brussels, Oslo and Buenos Aires.

This fantastic production is conducted by the Italian composer and conductor Andrea Molino, the artistic director of the World Venice Forum who conducted Of Mice and Men and Macbeth for Opera Australia.