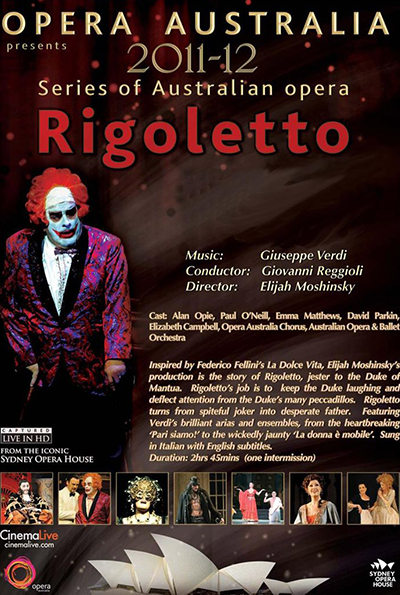 This stage production from the 2010 Sydney Opera House finds the Opera Australia and Elijah Moshinsky reinterpreting Giuseppe Verdi's Rigoletto as a journey into the underworld, visually inspired by Fellini's La Dolce Vita. Alan Opie performs the title role, with Emma Matthews as Gilda and Paul O'Neill as the Duke. Giovanni Reggioli conducts; The Opera Australia Chorus and the Australian Opera and Ballet Orchestra lend accompaniment.

At the Duke’s infamous parties, one man’s words light the darkness with a sinister glitter. Among the glamorous girls and greasy gangsters, Rigoletto serves his master with sharp wits and averted eyes.

But in this shimmering world of secrets and seduction, can he keep the one he loves most safe?