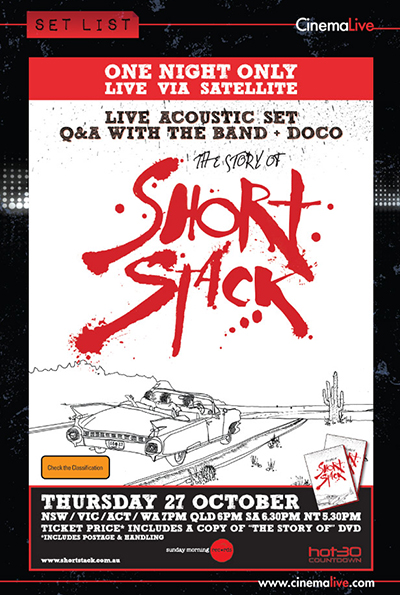 The Story of Short Stack

The Story of Short Stack is a 2011 documentary which documents the journeys of the Australian pop punk band Short Stack. It was directed, produced and edited by band member Andy Clemmensen. CinemaLive's premiere of the film included exclusive footage from the red carpet, a live acoustic set and Q&A.

The documentary spent years being made. It included the band's entire back catalogue of film clips and highlights of their career from their debut album Stack Is the New Black through to the cover of Rolling Stone on their 2010 album This is Bat Country and their single "Bang Bang Sexy”.

The film was premiered live via satellite at Event Cinemas around Australia. Hosted by Hot 30's Matty Acton and Maude Garrett, the cinema event included a live acoustic set by the band, a live Q&A with fans in cinema and the first screening of their documentary. Regardless of which cinema fans go to across the country, they were able to share in the same experience live.